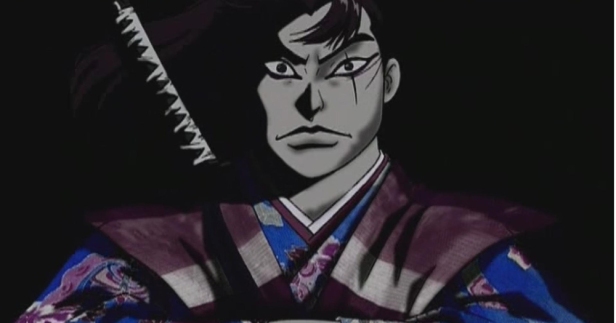 Aired:  Collected in January 2002 as a direct-to-DVD package film (OAV).

Plot: Digital Juice is a series of six shorts. Each short is directed by a different director. The shorts deal with a variety of subjects, but they share an emphasis on psychological issues, fantasy, and mystery.

There isn’t much to say about Digital Juice as I’m quite incapable of describing how weird and unique it truly is.  It’s one of those things you just need to see for yourself.  The total compilation  of this film looks like some-body’s acid trip but is essential viewing for all anime fans or people who are stoned or seeking an alternative to mind-altering substances.  The only drawback of Digital Juice is that the segments are too short to really sink your teeth into, some are as short as movie trailers.

Digital Juice is comprised of the following six shorts:

1) Lords of the Sword 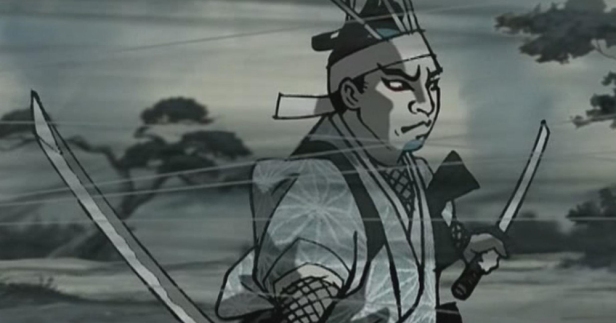 A 2 minute and 8 second short directed by Hidekazu Ohara, “Lords of the Sword” takes place in a town in the Muromachi era, and is characterized by intense action.

A 3 minute and 24 second short directed by Hiroaki Ando, “Chicken’s Insurance” is a CGI animation about chickens and supposedly produced by chickens. The short features the vocal talents of Yūji Ueda who plays the role of Chicken.

4) In the Evening of a Moonlit Night

A 4 minute 29 second (Wikipedia incorrectly states 2 minutes and 35 seconds) short, “In the Evening of a Moonlit Night” represents the directorial debut of Kazuyoshi Yaginuma. A simple tale of a girl and two boys, the short is characterized by intense color.

A 5 minute and 18 second short directed by Osamu Kobayashi, “Table and Fisherman” is a love story between a fisherman named Jack (Hisao Egawa) and his companion named Stefany (Yūko Nagashima). After coming upon a symbol for infinity, the two find themselves racing rapidly into the infinite. Along the way they encounter a bewildering variety of fellow travelers including the Great Western King (Hirofumi Tanaka), the Queen of Singer (Yuka Komatsu), the Mini Prince (Tomoko Kaneda), and the mysterious Samu (Keisaku Baba).

A 4 minute and 26 short directed by Kôji Morimoto, “Aerial Bar” is set in a saloon floating high in the sky. The story is told from the perspective of Wine-chan and recounts a sequence of events that unfold one strange evening as a number of bizarre characters gather at the saloon. “Aerial Bar” is notably shot primarily in live-action instead of animation as Morimoto is known for.